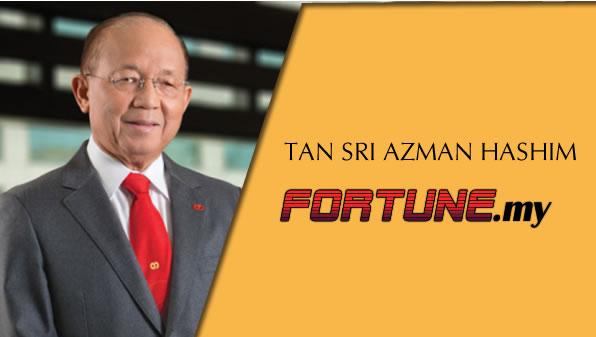 The man behind AmBank, one of the largest banks in Malaysia is Tan Sri Dato’ Azman Hashim. He is no stranger to the banking and finance industry for his achievements in these sectors. Tan Sri Azman is the 31st richest person in Malaysia with a net worth of close to half a billion.

Tan Sri Azman comes from a large family of 13 siblings. He was very bright in his school days where he landed the prestigious Colombo Scholarship to further his studies to Australia. There, he graduated with an accountancy qualification. He is currently the Pro-Chancellor of Open University Malaysia and is a professional chartered accountant.

After completing his studies in Australia, Tan Sri Azman established his practice in Australia before he was employed by Bank Negara. He would then go on to work with a few very established banks prior to his appointment to the chair of Ambank. Besides that, Tan Sri Azman is very involved in other organizations including being in the Perdana Leadership Foundation’s Board of Trustees.

A self-made millionaire, Tan Sri Azman’s main source of wealth is known to come from his accountancy and banking businesses.

Residence
Kuala Lumpur
Citizenship
Malaysia
Marital Status
Tan Sri Azman’s wife is YM Tunku Arishah Tunku Maamor
Children
He has 2 sons and 3 daughters with YM Tunku Arishah
Education
Tan Sri Azman studied at the Malay Boys’ School in Setapak and the Sentul Methodist Boys’ School. After that, he furthered his studies in Perth, Australia where he obtained his degree in accountancy.

Apart from Public Bank Berhad, the Arab-Malaysian Banking Group is perhaps the other bank which have stood the test of time and survived various economic downturns and crises. Operated under the Amcorp umbrella, it is one of the oldest companies in Malaysia today. Amcorp today is the parent company of the Ambank network as well as various major properties in around Malaysia that include Amcorp Mall and towers.

The company is controlled by Tan Sri Dato Azman Hashim through his private company Clear Goal Sdn Bhd. Apart from the banking industry, which is the primary revenue generator, Amcorp is also involved in many other businesses that cover the likes of property investments and management, information technology, consumer goods and others.

As mentioned, the company has a rich history where it began operations in 1910 which was then known as Temerloh Rubber Estates Limited. In 1961, the company went public where it would then move on from rubber to the palm oil and cocoa industries. Amcorp then acquired a 40% stake in the company after disposing the plantation businesses in 1992 and that was when Arab-Malaysian began transforming into a financial business and a property developer.

It then formed a strategic alliance with Australia and New Zealand Bank in 2008, 2 years after Amcorp was privatized. Today, Amcorp operates the fifth largest banking group in Malaysia with the merger with MBf Berhad. Apart from that, Amcorp also owns Harpers Travel (M) Sdn Bhd which is one of the leading travel operators of cruises and travel services in Malaysia. It is also the owner of the Restoran Seri Melayu chain while its Amcorp Auto subsidiary is one of the 3S appointed dealer for Volkswagen Malaysia.

On top of that, Amcorp is also involved in the ICT sector through its subsidiary MCM Technologies Berhad which was listed on the ACE Market and runs 7 subsidiaries that cover consultation, wireless technologies, energy and agritechnologies.