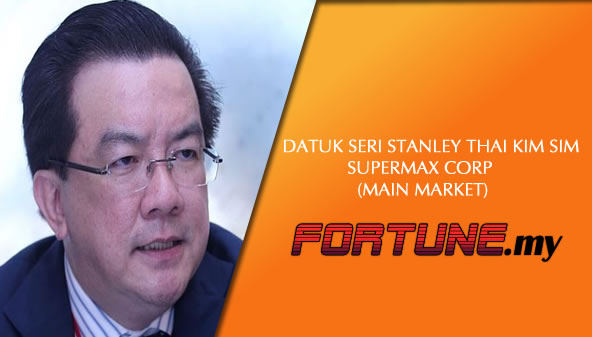 Malaysia is very much known for its rubber produce and is home to the world’s largest rubber glove producer. In this context, it is only natural that the rubber industry continue to spur growth for the country’s economy with more companies joining the fray and enjoying lucrative profit manufacturing its products. This is the very concept of Supermax Corporation Berhad which is chaired by Datuk Seri Stanley Thai Kim Sim who is one of the few richest men in Malaysia.
Supermax Corp is involved as an own-brand manufacturing of latex examination gloves where it is a Bursa Malaysia listed company that manufactures, distributes and markets its own medical gloves. It is one of the 2 largest companies which are involved in these industries where under Supermax’s network produces and distributes 16 billion gloves annually. The company was started by Stanley and his wife Cheryl Tan when it began trading latex gloves before growing into manufacturing and distribution.

As a supplier, Supermax exports its products to the whole world that encompasses continents like Europe, the United States, Middle East as well as Asia and the south Pacific covering a total more than 145 countries. Unlike OEM (Original Equipment Manufacturers), Stanley has, through his foresight and business acumen created and established the company’s own brands of gloves like Supergloves, Aurelia, Medic-dent, Supermax and Maxter which have been certified and recognized by health-related practitioners that include pharmacists, doctors, surgeons, hospitals and laboratories from the world over.

Today, Supermax supplies 11% of the world demand in the latex examination gloves sector. It operates 9 manufacturing plants in Malaysia using the most advanced and efficient systems. Its products are distributed through its network of offices around the world covering the United States and South America, Europe, Canada and Australia. On top of that, Supermax also partners with an additional 250 independent distributors to cover more markets in the respective industries.