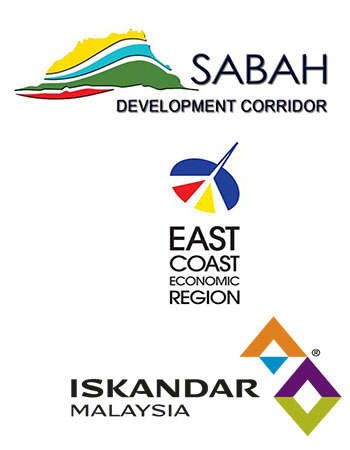 IRDA is the statutory body which is mainly involved in the development and promoting of Iskandar Malaysia in Johor. It is involved with regulating and driving of initiatives to bring investments and promoting Iskandar among the private and public sectors.

The NCER is one of the five economic corridors launched by the Malaysian government to improve the living standards of Malaysians. NCER is aimed at promoting better economic growth through various initiatives like investments, educational and societal policies and other efforts.

Launched in 2008, the SDC plays an integral role in improving the standard and quality of living among the people of Sabah through all types of socio-economic and developmental programmes launched through a federal objective in the development of the state.

SCORE is the second largest area among all the five economic corridors in Malaysia. It is mainly involved in the development and growth of the energy sector in Sarawak for the rest of the country through its rich natural resources.