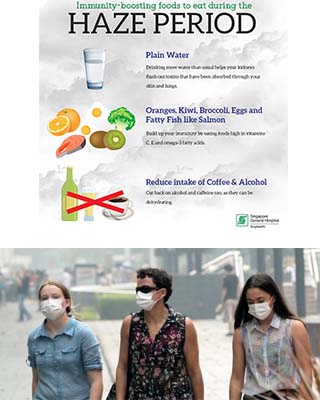 KUALA LUMPUR: Patients with diseases associated with respiratory illnesses are advised to take extra precautions during the haze period.

“Even if the air quality index is moderate, they must take precautions and stay indoors,” he said.

Dr Razak said for those with lung problems, the bad air quality could trigger an asthma attack.

“They have to increase their medication and wear masks when outdoor. If their conditions do not improve, they must go to the hospital,” he said.

The cause for the recent haze that hit the country was identified after satellite images indicated 600 hotspots with high temperature levels in Sumatra.

However the situation was not as bad as it was in 1997 and 2005, when the air pollutant index (API) reading recorded never seen before highs.

In 1997, Sarawak even declared an emergency because of the high API readings and this forced schools to close due to risk of contracting respiratory illnesses.

In 2005, an emergency was announced in Port Klang and Kuala Selangor when the API reached 500, again caused by massive and widespread forest fires from neighbouring countries.

Meanwhile the recent API readings showed good air quality in 39 areas and moderate in 11 others as of 11am on Thursday.

As at the time of reporting, the Department of Environment (DOE) has yet to highlight any area with unhealthy API reading.

The air quality in Malaysia is described in terms of API. It is an indicator of air quality and was developed based on scientific assessment to indicate the presence of pollutants and its impact on health. Good API ratings range from 0 to 50, while a moderate API is from 51 to 100. An API level of above 100 is unhealthy.

According to the DOE, what could help the country in this situation is the wind blowing the polluted air to another area or air-cleansing rain.

A spokesman from DOE also stated that right now the relatively dry winds of the monsoon are carrying smoke particles and pollutants from the Sumatra fires in the direction of the peninsula.

“Open burning, continued emission of toxic fumes and generation of other air pollutants through our own over-consumption and activities are contributing to the haze,” he said.