The Richest People in Malaysia 2021 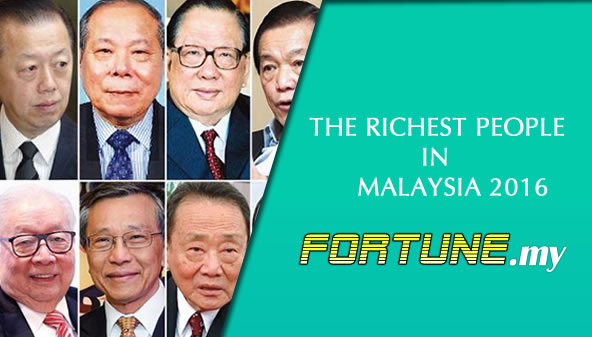 The richest Malaysian today is none other than Mr Robert Kuok who despite having a small dip in his fortune in 2016 is still at the peak with wealth amounting to $12.1 billion. He is most fondly remembered as the ‘Sugar King’ having made and started his empire in the sugar cane and sugar industries. At one time, Robert Kuok is said to have controlled some 10% of the world’s sugar supply.

Hong Leong Group’s Executive Chairman Tan Sri Quek Leng Chan sits on the second spot with a wealth of $9.6 billion. This is almost double of his net worth 5 years ago. Quek’s wealth comes mostly from his stakes in Hong Leong and he is involved in real estate and food businesses as well. His success came through the Hong Leong business which was started back in the 1920s by his father and has 2 other brothers. Today, Hong Leong has grown to become one of the large banks in Malaysia particularly with the recent merger with other banks.

Combined net worth of $6.4 billion, Koon Poh Keong and his 4 brothers are the team behind Press Metal Aluminium Holdings, one of the largest producers of steel products in the world. The company started in 1986 with $50,000 and has since grown to become the largest integrated aluminum producer in Southeast Asia. Koon Poh Ming is the Group Chief Executive, Koon Poh Ming is the executive vice-chairman while the executive director post is held by Koon Poh Weng.

T Ananda Krishnan or A-K in short is fourth in the list of Malaysian’s wealthiest. A-K’s wealth is worth is $5.7 billion where his wealth is widely attributed to his ownership of Measat and Maxis, the satellite and telecommunications leader in Malaysia. Measat of course is the operator of Astro. His ranking has dropped in the past few years where he was once the second richest person in Malaysia and third richest in 2018.

Tan Sri Dr. Teh Hong Piow is never known to be a man who likes the limelight. With a net worth of $5.3 billion, Teh is associated with his stake in the third-largest banking group based on assets in Malaysia, Public Bank Berhad. Known for being a self-made billionaire where he started out as a bank clerk, Tan Sri Teh is an inspiration for many after establishing Public Bank in 1966. He retired in 2019 as the non-executive chairman of the group.

Today, the bank is seen as one of the most profitable organizations in the region as well as among the most stable. His businesses have already expanded and performing well in other countries in the region which include Cambodia, Laos, Sri Lanka, Vietnam, Hong Kong and China.

The late Tan Sri Lee Shin Cheng of IOI Corporation was the fifth richest Malaysian in 2016. He passed away in June 2019 and his sons, Lee Yeow Chor and Lee Yeow Sing took over as Group Managing Director of IOI Corporation and Executive Vice Chairman of IOI Properties respectively. With a combined wealth of $4.5 billion, they have been working together to build the group known for its flagship property development projects and businesses in the plantations sector.

Kuan Kam Hon is one of the latest additions in the richest people in Malaysia for 2021 due to the COVID-19 pandemic. Kuan started out in construction back in 1969 after dropping out of school and then started Timol Weaving some 10 7ears later. In 1988, he established Hartalega Holdings and grew the company to become the largest nitrile gloves manufacturer in the world. The COVID-19 pandemic saw the shares of Hartalega more than double due to the global demand for protective gears. Together with his brother Kuan Kam Peng, they have a collective net worth of $3.8 billion.

Tan Sri Dr. Lim Wee Chai is the man behind world rubber glove producer Top Glove. He started the company with his wife Tong Siew Bee in 1991 to produce rubber gloves and has never looked back since it went 10 years after that. Today, Top Glove produces more than 100 billion gloves from its 50 factories and is among the largest producers in the world. Like Hartalega, Top Glove saw demand for gloves increase that pushed Lim’s wealth up the ranking.

Tan Sri Dr. Chen Lip Keong is the man behind NagaWorld, the casino license holder in Phnom Penh, the capital of Cambodia. It comes with a guaranteed monopoly until 2035 and is the largest casino resort in that region. He has a net worth of $3.4 billion and where he is the first casino company to be listed in Hong Kong.

The Tan brothers founded Mr D.I.Y Group in 2005, a home improvement retail chain. They were the recent additions to the list of Malaysia’s richest, taking the tenth spot. To date, the Mr. D.I.Y stores carry all types of products and have since expanded to more than 650 stores across the country. COVID-19 saw many businesses closed or not allowed to operate but Mr. D.I.Y, selling essential items stood firm and operated through the various phases of the MCO in Malaysia. The company went public in October 2020 (amidst the COVID-19 pandemic) that pushed its net worth to $2.7 billion.