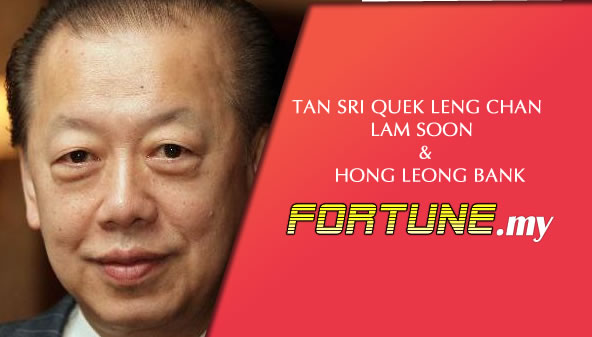 Lam Soon Malaysia is a fast-moving consumer goods company in Malaysia. It is owned by Tan Sri Quek Leng Chan, who is the Executive Chairman of Hong Leong Group Malaysia. Through this company, Tan Sri Quek holds 63.42% in Lam Soon which actually began as a milling and copra refining company.

It was established in 1958 when it was involved in the business where the oil extracted was used in the manufacturing of laundry soap and cooking oil where it then produced home known brands like Labour and Axe.

From there, it grew steadily throughout the years where today it is one of the most well-known brands in Malaysia where it is now one of the toilet soap, margarine and shortening products that uses palm oil. It would be in 1970 that Lam Soon began venturing into more industries through palm oil where it started manufacturing cooking oil with its plantations in both East and West Malaysia. Lam Soon then restructured and became Lam Soon (M) Bhd in 1985.

It then joined Southern Lion, the Japanese major consumer goods company in an equal joint venture where it started producing home care, beauty and oral care products. Apart from that, Lam Soon also ventured into the manufacturing of special edible oil in a biotechnology company in a joint venture exercise with Nisshin Oil Mills Ltd and Mitsubishi Corporation Japan under the company name Southern Nissin Bio-Tech Sdn Bhd.

Diversifying into other industries

Apart from that, Lam Soon also joint ventured with Akzo Nobel, a Dutch chemical giant that manufactures distilled fatty acids as well as in the refining of glycerin. Today, it operates the Lam Soon Senai Complex as well as the Telok Panglima Garang plant in Selangor. The former is equipped with a state-of-the-art modern supply chain network to cater to its distribution network that caters to consumers all over Malaysia.

Tan Sri Quek Leng Chan is one of the top 10 richest people in Malaysia. His wealth is reported to be well over USD7 billion. An alumnus of Victoria School in Singapore, Tan Sri Quek is a lawyer in practice. Besides Lam Soon, Tan Sri Quek holds various high-profile positions. This includes:

In all the businesses that Tan Sri Quek is involved in, Hong Leong Group is perhaps the most high profile. It is, after all among the largest banking groups in Malaysia. The conglomerate was started in 1963 where it started as a trading company. Under its wings are 14 other listed companies. The group has companies that are listed not only in Malaysia but very strong in other countries like the Philippines, Hong Kong, Europe and Singapore.

Over the past decade, there has been a lot of major changes in Hong Leong Group. Among them includes:

Malaysia
Marital Status
Married to Yap Suan Leng
Children
Tan Sri Quek has 2 sons and 1 daughter. His son, Kon Sean Quek sits on the Board of Directors in the group while his daughter Quek Sue Yian is also involved in Hong Leong Group’s business as well as involved in Magicbird Publishing, a company that produces literature for children.