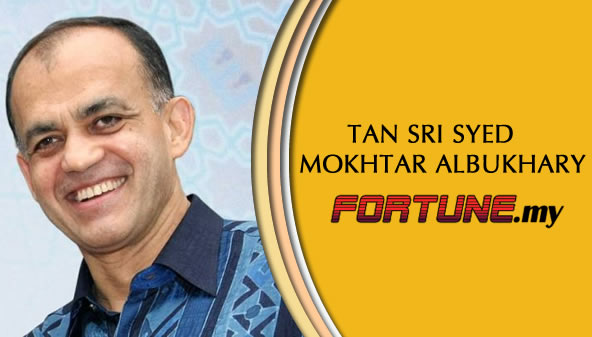 Tan Sri Syed Mokhtar AlBukhary is often regarded as one of the most humble tycoons in Malaysia. With a wealth of US$1.4 billion, he is the 18th richest person in Malaysia in 2021. This self-made billionaire leads a low-profile lifestyle although his companies provide every form of daily essential to Malaysians including food, transportation and groceries, among others.

DRB-Hicom is one of the most widely reported Malaysian companies in recent years. This is mainly due to the fact that the company has become quite an iconic story on rising through the hardship of crisis after crisis and still coming out on top. The company was set up in 1980 and is today one of the top and largest conglomerates in Malaysia. Its main business is in the automotive industry although DRB-Hicom also holds interests in other businesses.

Perhaps a more significant fact about DRB-Hicom is that it is part of the empire of Tan Sri Syed Mokhtar Albukhary, the founder of AlBukhary Foundation and the fifth richest man in Malaysia. He holds a 55.92% stake in DRB-Hicom which has is actually the merger between DRB and Hicom which was the original producer of Proton, the national car project. Today, DRB-Hicom comes with many years of experience that saw the company being involved with the manufacturing, assembly and distribution of the national motorcycle and national truck projects respectively. Apart from that, DRB-Hicom had also been involved in the passenger car, 4WD and other automotive-related industries as well.

DRB-Hicom also owns 32.2% in Pos Malaysia, the national postal and courier services while the recent takeover of shares in Proton Holdings saw DRB-Hicom taking ownership back in Proton Holdings after selling it off to Petronas in 1990. This came in the light of the recent events where Khazanah Nasional Berhad announced that it would be selling off its 42.74% in Proton. DRB-Hicom won the bid and will become the controlling shareholder in Proton. With the 7.27% it acquired through the open market, DRB-Hicom holds 50.4% in the national carmaker. As part of its direction in the automotive market, DRB-Hicom is also the authorized assembler and distributor of Volkswagen cars for the ASEAN region.

In 2017, DRB-Hicom sold 49.9% of its shares in Proton to Zhejiang Geely of China which has since enjoyed much success with their new Proton models, the X70 and X50.

Malaysia has its own timber tycoon and Sugar King. The Rice King title however belongs to none other than Tan Sri Syed Mokhtar AlBukhary, the only Bumiputera in the top 10 of the Malaysia’s top 40 richest list. This is where he holds a major stake in Padiberas Nasional Berhad (BERNAS) which is a Bursa Malaysia listed company. Essentially, Bernas is involved in the paddy plantation and domestic rice industry through its group of companies which are involved in the all areas of this product.

Syed Mokhtar is currently the fifth richest Malaysian where his 37.10% stake in Bernas is held through his controlling share in Tradewinds (M) Berhad. It must be noted that Bernas is the market leader in rice production where it controls 24% of the paddy market and produces almost 45% of the demand for rice in Malaysia.

The tycoon is renowned for his humble and low-profile persona where despite his wealth, he is a very religious and charitable man. The AlBukhary Foundation runs and operates various companies under its umbrella which are very much involved in the plantations sector, the area which Syed Mokhtar is most familiar with having grown up in the farming business.

Apart from the paddy and rice production areas, Bernas is also involved in all other types of related services where it is now involved in the entire supply chain of this product encompassing the areas of joint ventures as well as seed and farming activities. Bernas currently employs more than 1,600 people under its staff force while through its Privatisation Agreement with the Government, Bernas is responsible and is tasked to ensure that the country’s rice stockpiles are sufficient and enough at all times. On top of that, Bernas is also the voice of the government under the Paddy Rice Subsidies and the Bumiputera Rice Millers Scheme.
Net worth
$1.2 billion
Source Of Wealth
Tan Sri Syed’s wealth comes from his businesses in the automotive and engineering sectors, among many others.
Residence
Kuala Lumpur
Citizenship
Malaysia
Marital Status
Married to the Puan Sri Sharifah Zarah Albukhary
Children
Tan Sri Syed Mokhtar has 5 children. His daughter Sharifah Sofia binti Syed Mokhtar Shah holds the non-independent Executive Director positions in Pos Malaysia, DRB-Hicom and MMC Corporation Berhad.
Education
Tan Sri Syed Mokhtar is known to be a high school dropout and a self-made billionaire.