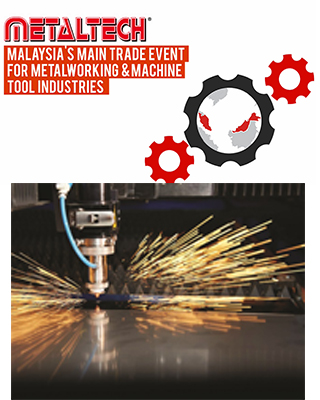 Year after year since its inception in 1995, METALTECH MALAYSIA (MTM) has been THE event for the machine tool and metalworking industry. It has now reached new heights with its latest inception, achieving recognition as one of most event in South East Asia.

Facts that demonstrates the importance of MTM as gateway to the lucrative manufacturing sector:

A total of 1,318 exhibiting companies from 33 countries in the year 2007
Expected to be attended by a total of 25,000 visitors.
Endorsed internationally by the Global Association of the Exhibition Industry (UFI)
Endorsed by the Malaysian External Trade Development Corporation (MATRADE)
Supported by 8 local and international industry association.
As Malaysia moves towards developed nation status, the manufacturing sector will continue to be a major contributor to economic growth. In the year 2005, it accounted for 31.4% of the gross domestic product against 31.6% in 2004. Total exports of manufactured goods stands at RM143 billion in 2005, accounting for 77.4% of total exports.

Under the announced Ninth Malaysia Plan, the manufacturing sector has been identified as one of the key growth areas for the economy. This sector is forecast to grow at an average rate of 6.7% per annum while the exports of manufactured goods is expected to register an average annual growth of 9.3%.

With this positive outlook of the economy, the opportunities at MTM2008 are abundant.